This author has yet to write their bio.Meanwhile lets just say that we are proud admin contributed a whooping 22 entries.

What to do in the event of a positive diagnosis According to Johns Hopkins University, 3 million children between the ages of 10 and 12 will be diagnosed with Scoliosis this year. Children at middle schools across the country will be screened for scoliosis – If your child returns from school with a positive diagnosis […]

Pack up the beach toys and bring out the books. It’s time to go back to school and your child is going to a new grade! A new school year means new backpacks, new teachers, and a whole lot of homework. Although we are well aware of how homework affects the stress levels of our […]

For years, Scoliosis has been a real concern for Olympic athletes such as: Usain Bolt – The most decorated sprinter of all time, Jamaican four-time Olympic gold medalist sprinter, Olympic record holder reigning Olympic champion in the 100 and 200 metres and the 4×100 meter relay Alexandra Marinescu – Romanian Olympic gymnast and European Junior […]

Dear Parent, I want to share my experience with my 10 year old daughter, so it may help other parents going through the process of Scoliosis. My daughter was diagnosed with Scoliosis and we as a family where completely shocked. We didn’t know what scoliosis was and nor the severe complications that could arise in a person’s life if […]

Has your child recently been diagnosed with Scoliosis and you’re in the “Wait and See if it progresses” mode? Well you’re not alone! Every year 15% of all grade school kids screened for scoliosis result in a positive diagnosis and yet many physicians still suggest three basic methods of treatment: observation, bracing, and/or surgery – based […]

What we wear on our feet can say a lot about who we are. Shoes are often an exciting channel to express personality, but we can’t forget about why we wear them in the first place. While footwear exists first and foremost to protect our feet, they can also have a significant effect on our […]

Ahhhhh… the new school year is now in full gear – new school shoes have been broken in, uniforms have endured their first stains, and everyday more and more it seems the shiny new back pack begins to suffer the effects of whopping homework overload! Why should I be concerned? Did you know (as per […]

An estimated 6 million people in the US alone suffer from scoliosis Scoliosis affects both men and women of all ages, races and socio-economic classes The onset of scoliosis is usually between 10 and 15 years of age More females than males are affected with Scoliosis It’s recommended that children be screened yearly! Early […]

I’m impressed with Doctor Greaux and his experience with Scoliosis. Most Chiropractors are passionate about health and well being, but to get the CLEAR training to treat and educate his patients is an honest dedication to natural health. I’m so happy and grateful we found him!

Dr. Alex and his staff are truly amazing. My son has been a patient here for almost two years. If you are hesitant to start treatment for your child….DON’T! Dr. Alex has really invested time in my son’s treatment. He is even making special equipment for him, since what he needs isn’t currently on the… Read more “Amazing!”

In mid-October, 2015, my 13-year-old daughter was complaining of pain on her upper right side. She is a pre-professional ballerina and chiropractic care is a regular part of her care, however, her pain did not subside upon treatment. Fortunately for us, her local chiropractor did a further examination in order to assess the source of… Read more “Ballerina Mom”

The best alternative to back operation

This is the best treatment and alternative to a back operation for scoliosis I’ve ever come across. I have had scoliosis since childhood, and noticed that as I’ve aged the scoliosis pain had become acute. So painful that after using my right arm for a few hours during routine household chores and painting at my… Read more “The best alternative to back operation”

When we found out our 10-year old daughter, Grace, was diagnosed with Scoliosis, we didn’t know anything about the condition. We went to a specialist, who informed us she had a 40 degree curve that would not improve and would most likely get worse to the point of surgery, and until then she needed to… Read more “Determined…” 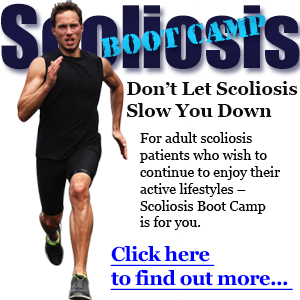